This Is [Not] Who We Are 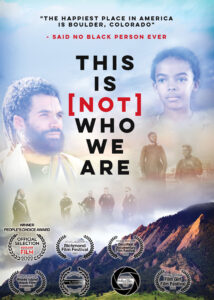 Boulder, Colorado, prides itself on being beautiful, welcoming, inclusive, and politically progressive.  Yet the last census lists only 1.2% of Boulder’s population as African-American (an additional 4% identify as mixed-race.)  In 2019, our community saw two abusive policing incidents involving Black citizens, one resulting in officers menacing a student with drawn guns and the other resulting in physical injury.  Our documentary work-in-progress, This is [Not] Who We Are, co-produced by Landlocked Films and Blackat Video Productions, explores the gap between Boulder’s progressive self-image and the more complex lived experiences—both historical and contemporary—of its Black citizens.

Established in 1859 on land expropriated from the Southern Arapaho, Boulder was unusual from the beginning.  At a time when homestead land was available at a little over a dollar an acre, Boulder’s founders were selling lots for $1000 and imposing special rules for how cabins had to be constructed.  These foundational gestures of Boulder as a beautiful and expensive place to live became a lasting legacy.

Black families have been in Boulder continuously since the 1870s. They have faced discrimination in housing, employment, education, health care, criminal justice, and social activities.  By the turn of the 20th century, three institutions dominated Boulder’s skyline: the University of Colorado, the Boulder Sanitarium, and Chautauqua Park – each engaging in practices of racial discrimination that shaped the city’s character, but little recalled today.  After 1910, the Black population began to shrink.  Many young people left for Denver or other places of greater opportunity and diversity. Others stayed, working hard to build the Black community and contribute to the broader community.   By the 1920’s, Boulder had become a rallying point for the Ku Klux Klan.  After World War II, Boulder acquired a reputation for political liberalism, yet established habits of racial segregation continued.  In the 1970s, however, with the arrival of the federal labs and IBM, employment and housing opened up.

The 2019 video of police harassing and then threatening Zayd Atkinson, a Naropa University student performing his work-study job cleaning up the grounds of his student housing, galvanized a community-wide conversation on the subject of race and our city.  Our film documents Zayd’s story and interviews a cross-section of Boulderites to capture aspects of this conversation and the issues it has raised.  More recently, the murder of George Floyd by Minneapolis police has further intensified this conversation, resulting in protest marches, impassioned reactions, and soul-searching.   This is [Not] Who We Are seeks to deepen the dialogue about Boulder, the increasingly gentrified future toward which it seems to be heading, and whether a more economically, racially diverse, and socially fair and just future is possible.  The voices of our film suggest that, unfortunately, Boulder is still driving some of our most talented and promising young people away.  We explore this poignant reality, confronting what one our film characters has labeled our “diversity collapse”.  We hope this film will speak to communities like Boulder across the country, as newly-engaged people from many backgrounds seek positive efforts toward dialogue and change.

This is [Not] Who We Are premiered in March 2022 at the Boulder International Film Festival, where it won the People’s Choice Award.  It is now playing at select film festivals around the country.

To learn more, please be in touch with notwhoweare[dot]outreach @ gmail[dot]com, beret @ landlockedfilms[dot]com or blackatproductionz@gmail[dot]com.  Please be in touch if you would like to host a local screening or make a donation to support the making of the film.  Thank you kindly!  (If you would like your donation to be tax-deductible, please send a check to our 501©3 fiscal sponsor, The Denver Film Society, 1510 York St., 3rd Floor, Denver, CO 80206.  Important note: It’s essential that you indicate on the check’s memo line or in an enclosed note the name of the film your gift supports.)